The rest day was good for my knee, but I feel a bit anxious about the trail and the coming river crossings. Tim met a nice guy living at Arthur’s Pass who drives us in the morning to the trail head. Shelley is getting off earlier to do the highway section after the Mingha track. I have decided that since I can’t do the Deception-Mingha track and the first river cannot be crossed by foot, I don’t want to walk the highway instead. It’s a beautiful morning, that changes so much and gives me a much better feeling. We make a picture stop on the way as the view is amazing. 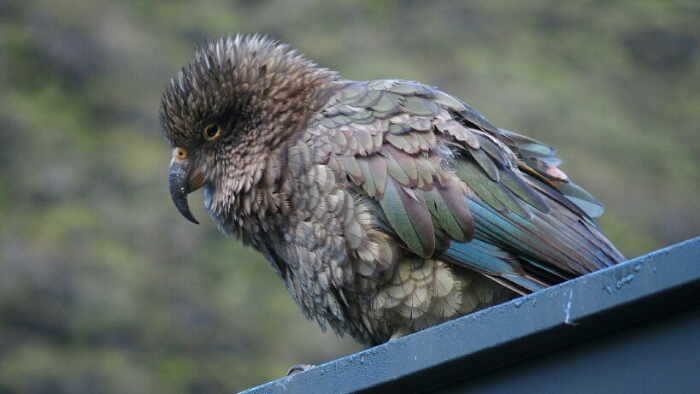 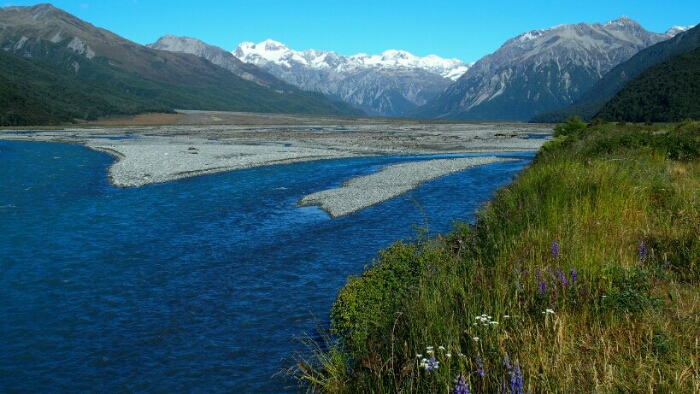 Tim is of course running ahead while I am rather slow walking up to the saddle. Once I am out of the forest, the view of the mountains is beautiful! 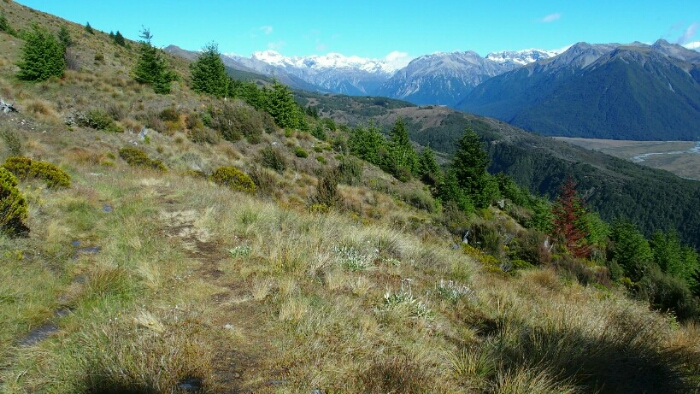 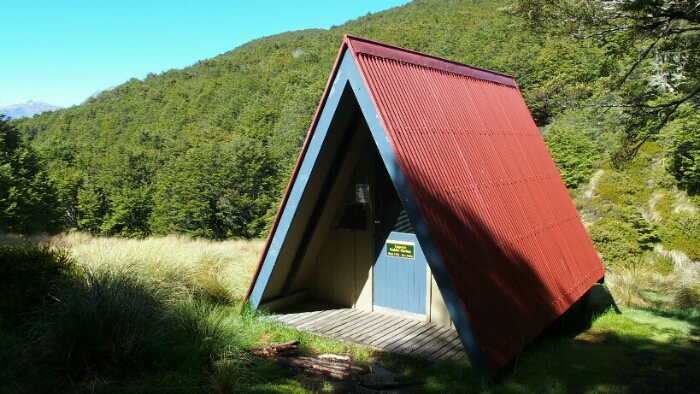 The trail is easy and after 2 instead of 3h I am already at the Lagoon Saddle shelter. My knee hurts still and I am hiking carefully. The Harpers river trail crosses then several times the river, bit it’s a small river and the crossings straightforward. I enjoy the hike and the views, hiking can be so nice!!! 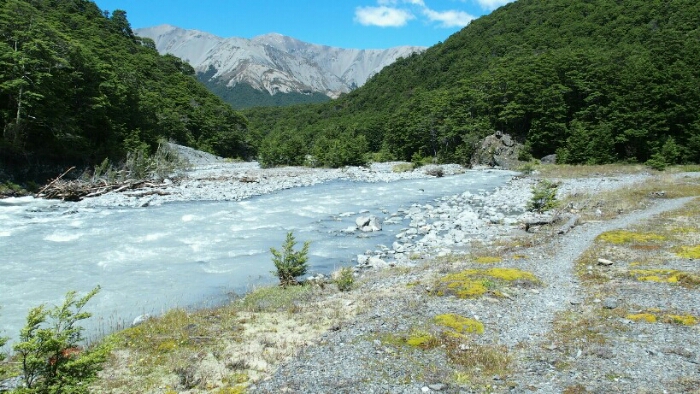 Around 2pm I am at the intersection with Hamilton Hut and decide to continue. I am not even walking the 5 minutes to the hut as I know it’s a very nice one and I might change my mind. But the sunny day is just to great to stop now. I am a bit scared of the river crossings but according to the trail notes I can also just stay on the left side until the final crossing in the end of two rivers, where I plan to set up my tent if I can’t cross. In the beginning it’s easy and the flat terrain is good for my knee. Then I have to walk through gorse in order to stay on the left side. Not good! I put on my rainclothes to protect my skin but am soon sweating. The next part is even worse, scrambling up a hill in the forest, no trail, fighting my way through up and down. 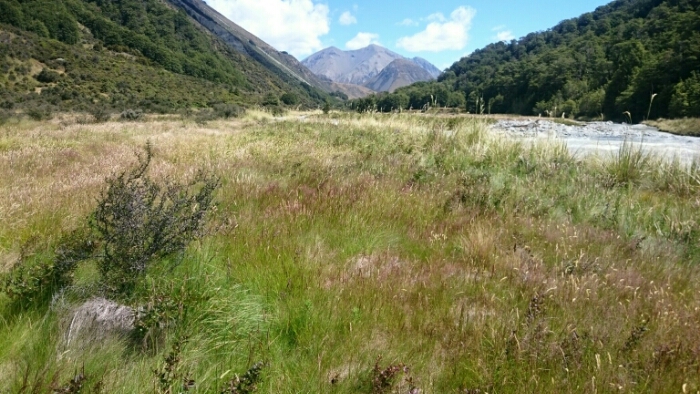 Then I decide to try a river crossing and walk the easy trail. And it is actually not too bad to cross the river!  From then on, I navigate as I think best between the river arms and sides, sometimes following a trail, sometimes the river bed, sometimes the forest… The final crossing of the Harper River is also fine.

Now only the Avoca river remains. According to my GPS I have crossed the biggest arms easily and am reliefed. But just shortly, I can now see more to come! This looks to strong to cross so I hike up the river for a long time crossing arms one by one until only one remains. The current looks strong but I don’t know how to return now either. Should I just try to push through? I try and fall in the very end due to the current. Again. Luckily it wasn’t really dangerous but I fell again on my knees and both hurt badly now plus I am wet. My backpack as well. It’s already late, around 6.30pm and I figure with my knees hurting I won’t make it 8 more kilometers to the campsite. I start hiking again, I don’t want to stay where I am. Slowly I follow the trail when I stumble upon two tents and two other TA hikers! They didn’t dare crossing the river, especially as they didn’t know how bad it would be after that one. Well, I guess I should be following their example next time! I am really done with rivers now. The river wasn’t discoloured but having a strong current. It hasn’t been raining for 24h. How long are you supposed to wait and how can you really assess if a river has a ‘normal’ level if you don’t have a comparison? I pitch my tent and have dinner, trying to dry my stuff in the remaining evening sun before sleeping. My knees are quite badly hurting. At least tomorrow will be an easy day. No rivers to cross but hitchhiking instead. The mighty Rakaia river is a hazard zone anyway, no way to cross it right now and no way I will try it any time in my live!

Maybe the South Island is trying to kill me? Or just test my level of resistance? My body is shattered, my knees painful and my legs look awful with all the scratches from gorse, bushlawyer, falling,…  Also my camera didn’t survive falling in the water. But I am determined to continue whatever the trail throws at me. Now even more scared of river crossings but that won’t stop me either.

At least last night was dry and I felt safe with the two other hikers. I start at 7am and have a long day of mainly road walking ahead. After half an hour I am warm and in a flow, the few remaining streams are crossed easily and I walk out of the valley on a gravel road. The mountains are so beautiful and steep, but for once I am happy that I don’t have to hike up there as my knee would not be able to handle. Flat is alright though.

Once I reach Harpers Road, another gravel one, I put music on as it’s going to be a 22km road stretch! A car passes every half hour or so and soon my feet hurt from road walking. I like the landscape but today it’s hard to continue. I read about the next section which has a number of difficult river crossings which cannot be done after heavy rain. I pray for the weather to finally stay dry! Right now the sun is burning down on me but further rain expected. The sky is also not as clear as yesterday with clouds coming in. 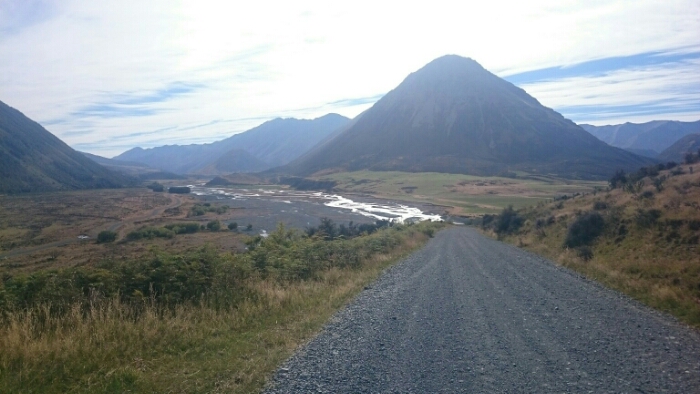 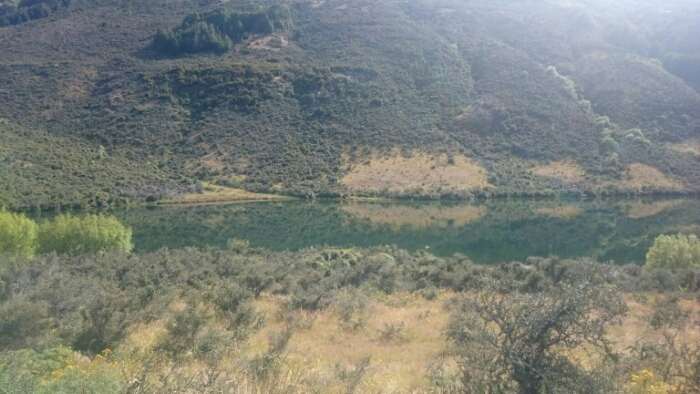 An endless time later I reach the next trail along and above Lake Coleridge. Not a nice one but at least off the road!  It’s getting very windy now, seems a storm is coming in.

After the lake trail further gravel road and then through the Arboretum and nice pine trees to Coleridge Village. A tiny settlement with a power station. And view of the Rakaia River which is a natural boundary of the trail and I am forced to hitchhike around.

It’s 4.15pm and the guy cleaning the public toilets tells me I should be able to get a ride at 4.30pm and most of the people go to Christchurch but on Mondays and Tuesdays the woman who lives in Methven is working. I am lucky!  Just 5 minutes later she comes out and is very happy to take me. Initially I wanted to camp at the Rakaia Gorge campsite but it’s such a storm now that I prefer going to Methven and be sheltered and able to take a day off should there be more bad weather tomorrow. On the way we pick up another guy, a TA hiker! In the hostel is already another hiker friend of him who organised transfer to the trail head tomorrow for 90$. It’s expensive but OK divided by three and I don’t have to worry about hitchhiking plus we can cross the rivers together!  Finally some good outcomes today.