From Ushuaia it’s only some 12km to the Fireland National Park. As I came off the ship from my Antarctica cruise much later than expected plus having had to organise a few things, I end up at the road around 2pm. The shuttle bus is so expensive for such a short distance that I decided to try my luck. I walked 2-3km to a good point and after 5minutes a friendly Argentinian from Ushuaia picks me up and takes me to the intersection. From there only 5km left, I have to wait a while and someone else takes me. This time he doesn’t speak anything but Spanish and I don’t understand him at all. He tells me 4 times the same thing while his little daughter of probably just a few months is sitting in the back. I just repeat “entrada parque nacional” and somehow end there while the guy turns around and drives back. Very nice but I now see how much harder my life will be here without speaking Spanish! 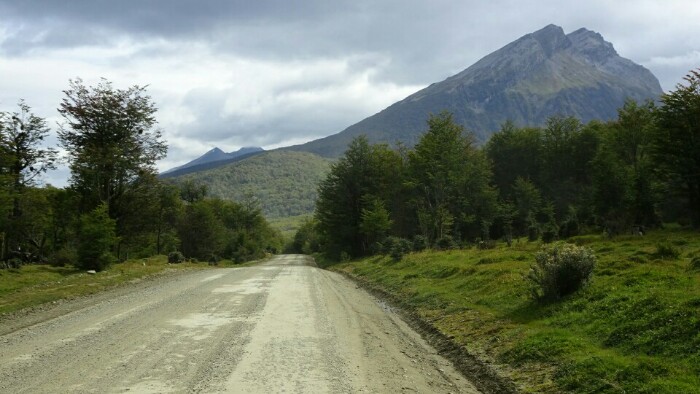 I pay the entrance fee of 350 pesos, allowing me to stay 2 nights and 3 days. Then I have to do a bit of road walking before I finally reach the pier and Lapataia Bay.

From there it’s a wonderful walk of 8km along the coastline. Somehow it’s become automn! After summer in New Zealand and out of time Antarctica, it feels strange to see that here it is now already automn and leaves are turning red. It’s good though after the white, grey and blue to have again more colours, to have trees, plants, green… But it also seems I need to hurry up to see everything before winter! I now wear my sturdy hiking boots I picked up in Auckland and it will take me a while I guess to get used to them after the lightweight trail shoes. I am still convinced it’s the right choice especially for cold weather. 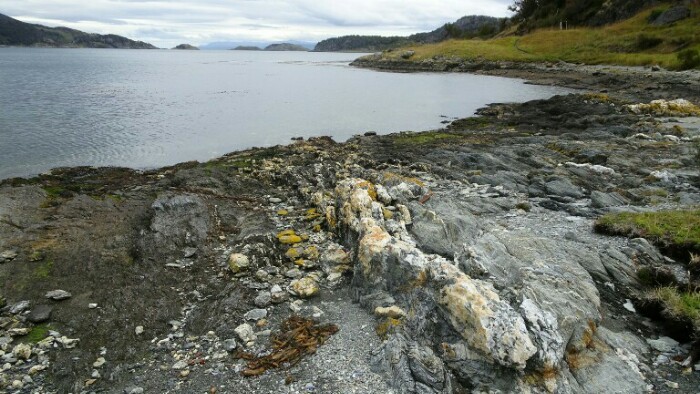 When I reach the next time the road again, I have to follow it before continuing on another short trail with views of green rivers and lagoons. 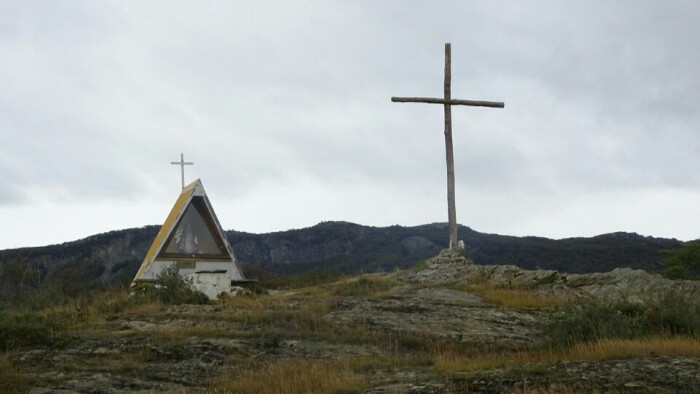 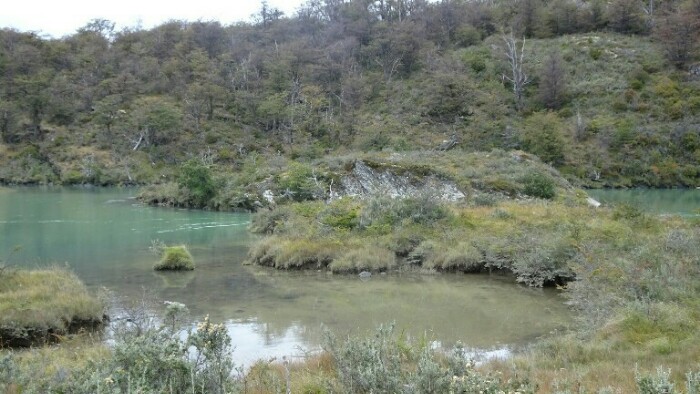 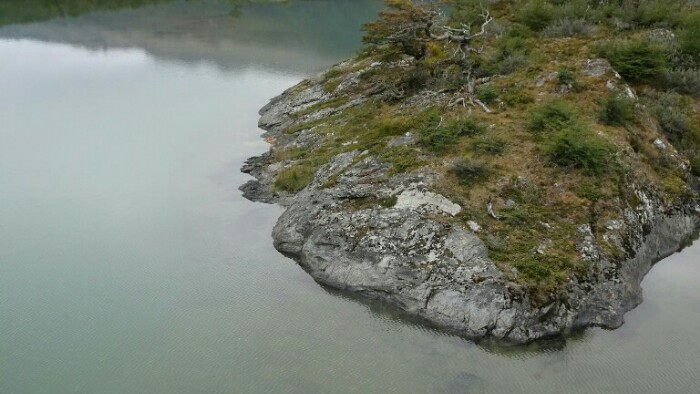 At an free campsite, I opt for the left side, a sheltered place. Everyone else (well, the handful of other campers) is other other side which is in a more beautiful setting but without any shelter. I have learned my lessons in New Zealand and prefer now to be protected even if right now weather is still alright. And I actually look forward to a quiet night. There’s so much to digest still and think about. It’s around 10 degrees Celsius during the day but dropping rapidly in the evening. There are plenty of mosquitoes around my tent and I wonder how they survive here. I thought I would finally be rid of them…

The night is unpleasant, I am not used to the noises around here and it’s rather cold. The worst? My inflatable sleeping pad “exploded” in the middle so that two of the small compartments became one, much larger. I try to ignore it but it’s not easy to sleep on a shaky thing. I will have to live with it for a while, it’s far too expensive to buy gear here, especially after exploding my budget with the Antarctica expedition.
Finally it’s sunrise and I prepare a hot pot with coffee and oats all in one. Then I walk to a few of the small walks around my camping place. First to Laguna Negra, a small lake, and then down to the Lapataia Bay. I get a nice view illuminated by the morning sun. 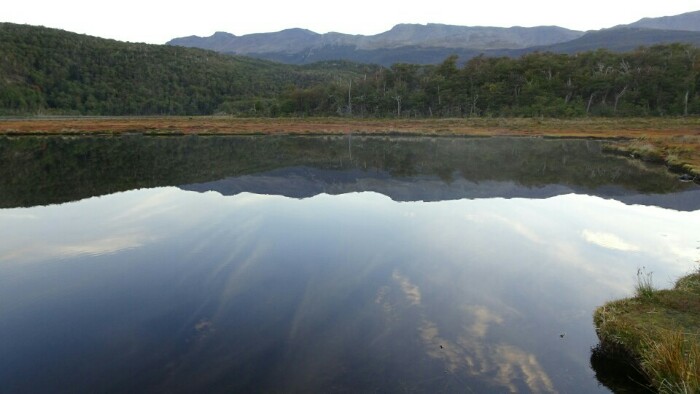 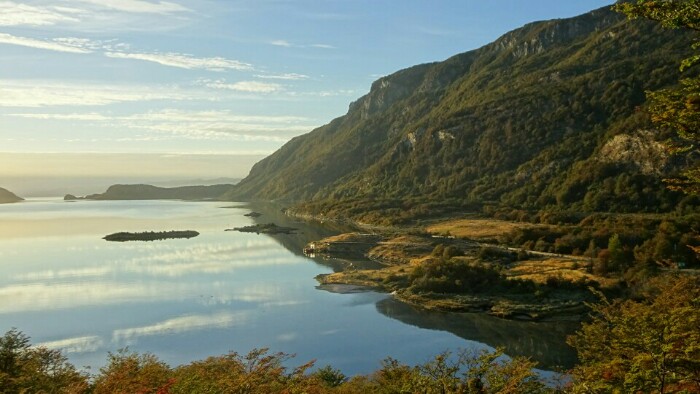 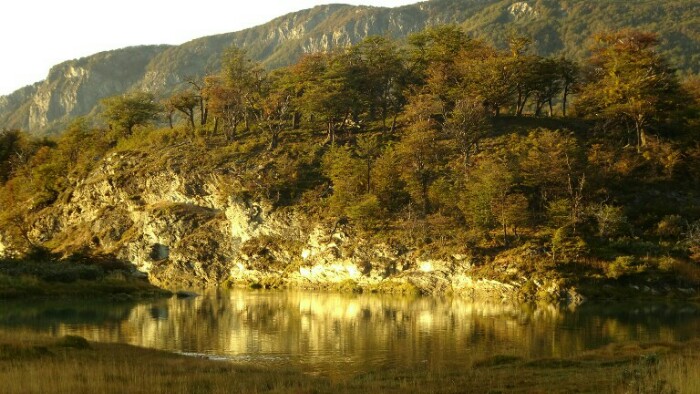 Then I hit the road again, walking a few kilometers to the start of the bigger trail today, up 947m to Cerro Guanaco. I am very lucky, not many clouds today, no rain. That is very unusual around here and I heard that the week before there was no good day but only storms.

From the lake I walk up a beautiful beech forest which gets colourful automn leaves now. I feel quite strange and cannot identify why until I realise that I am “land sick” now. I feel like I am still on a rocking boat only I am on sturdy ground and it seems my balance or brain hasn’t arrived yet. 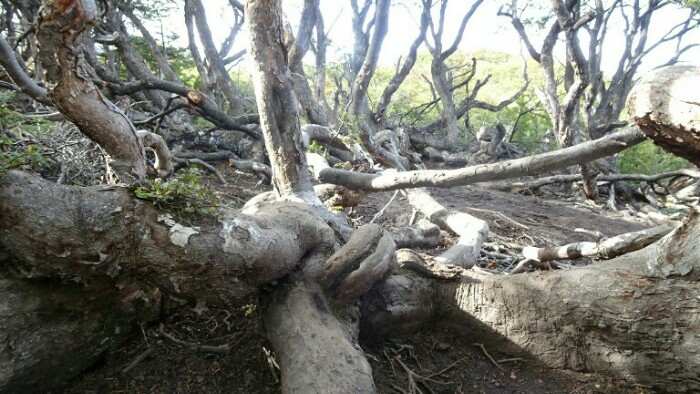 Of course it gets muddy at one point and a little swampy once out of the forest but then the trail follows a scree slope uphill with great views!

And once I arrive at the top the sun is out! There’s a 360 degree view of Ushuaia and the Beagle Channel, Lapataia Bay and plenty of other valleys I cannot name. 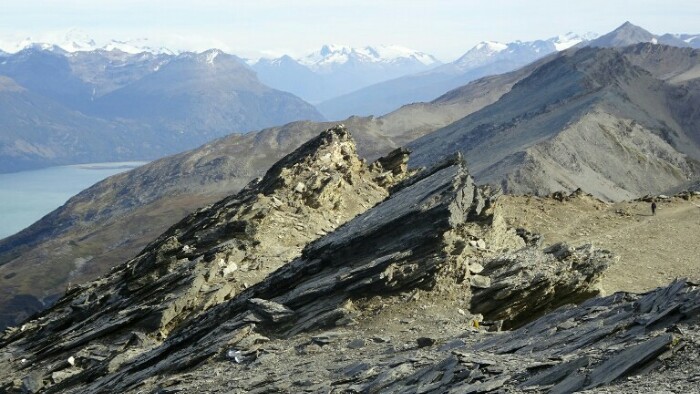 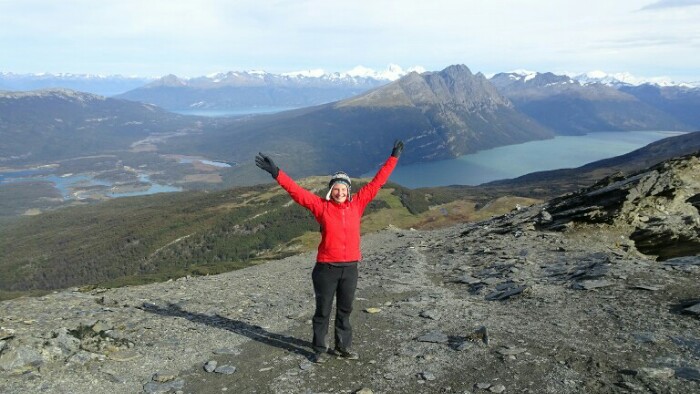 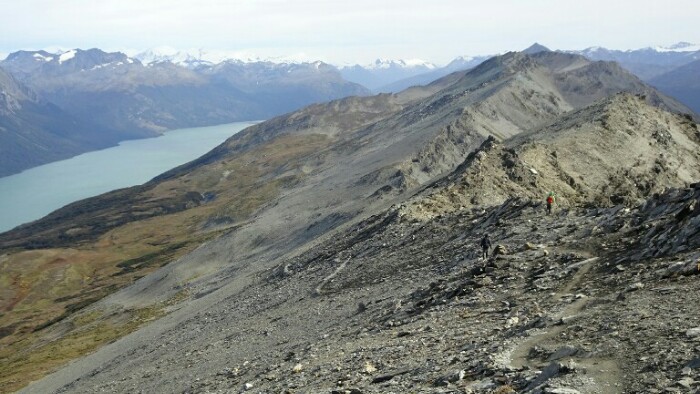 Just a handful of other hikers are there, luckily I started early as I will meet plenty on my way down. It took me about 2h30 to hike up, going down is much faster especially as I talk with a Swiss guy and we have a lot to share so time flies. At the bottom of the mountain we say goodbye as I go searching my backpack that I hid in the forest so I can hike up lightweight and easy.

Then I start walking on the road, trying to hitchhike with every car. It might have taken half an hour or so until a couple from Buenos Aires picks me up. The man with little English skills and me with little Spanish skills try to communicate but it’s again difficult. They drop me off in the centre of Ushuaia where I check at the information for hostels. It’s now getting low season and there are plenty of options and I take one close by.
After a shower I book the ferry for tomorrow to Puerto Williams, on Navarino Island (and in Chile, not Argentina anylonger). It’s just across the harbour but very expensive ferry ride. But I have now heard so many good things about the Dientes Circuit that I just have to do it. So tomorrow I am off to Chile and a 5 day hike..