​Day 19. The rest day yesterday was great in the end, I catched up on my emails, blog, wrote postcards, read a lot on my kindle and ate a big pizza in Trenta. In the afternoon I catched the bus back to my hut at the Vrsic Pass. The hosts are still as adorable. They show me the weather forecast (rain!) and warn me again about the icy snow part on the main trail tomorrow. So finally I don’t get to do the spectacular trail, but safety first especially with rainy weather. As there are three Italian men who are staying as well, the host gives me the key to the dormitory and asks me to lock tonight from inside. You never know! It makes me smile as the three men seem kind, but it’s nice to be taken care of.

Suddenly I notice that my camera is missing. I cannot find it and after thinking a while I remember that my open backpack fell down in Trenta at one point. It must have fallen out. So now it can be either stolen, in safe hands at the tourist info if someone honest found it, or still lying there on the ground. I cannot sleep much as heavy rain pours down, thinking about my camera that will be dead tomorrow with this rain.

Next morning I start early, making my way down to Trenta by foot this time. The trail is nice and the short detour to the Soča source pretty cool on a via ferrata. Thinking all the time about my camera I cannot really enjoy it though.

As I reach Trenta I can see the camera lying under a wooden bank, protected by a tree. The pouch is wet but the camera seems all fine. It is working and I thank all my trail angels who helped me again!

Very reliefed I start the hike up to the Pogačnikov hut, another 1500m altitude to go, but I don’t even mind the rain now. Luckily again it stops sooner than later and I enjoy the beautiful hike up and the great views on the Trenta valley. 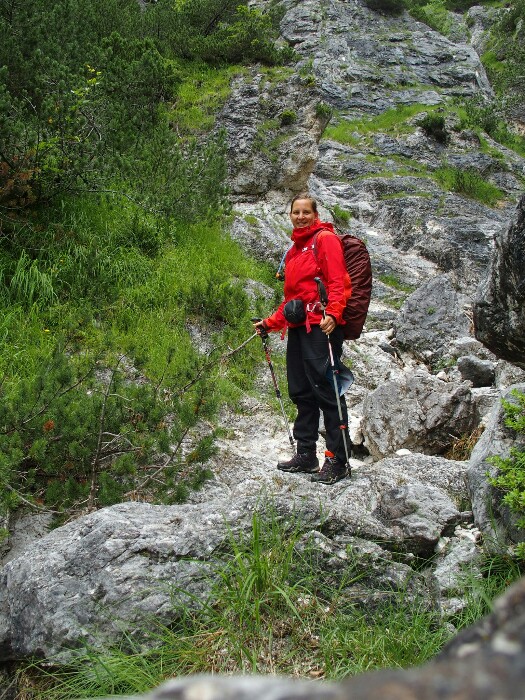 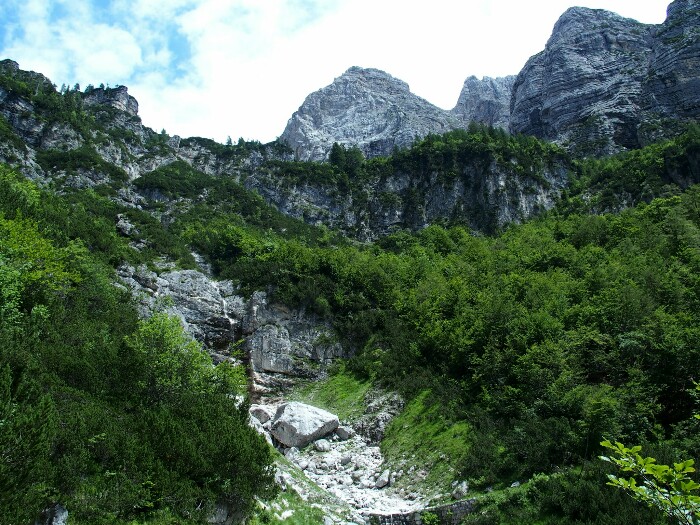 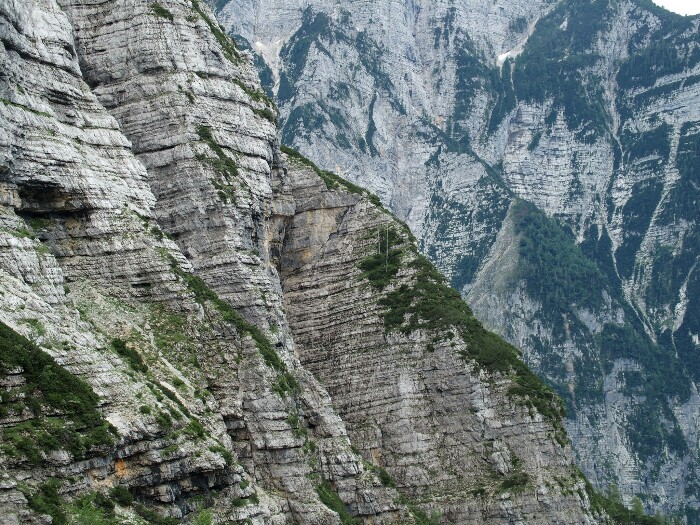 There are already two Irish guys at the hut and it’s so nice to have someone to talk to. The hut has an amazing view on the valley and the mountains. A Scottish couple joins a bit later, all are doing the nice via ferrata here. We spend a very nice evening chatting and eating and I am even invited to some wine. Just the Slovenian food is an issue. As I don’t eat goulash, I have to take Jota, which is a soup consisting of sour cabbage and if you look hard also some potatoes. Ugh. Afterwards I really need an apple strudel to get rid of the sour taste. Plus the mountain glow in the evening is just beautiful. I am again the only one in the dormitory as the others are in a room. It is really cold and hard to sleep for me tonight. 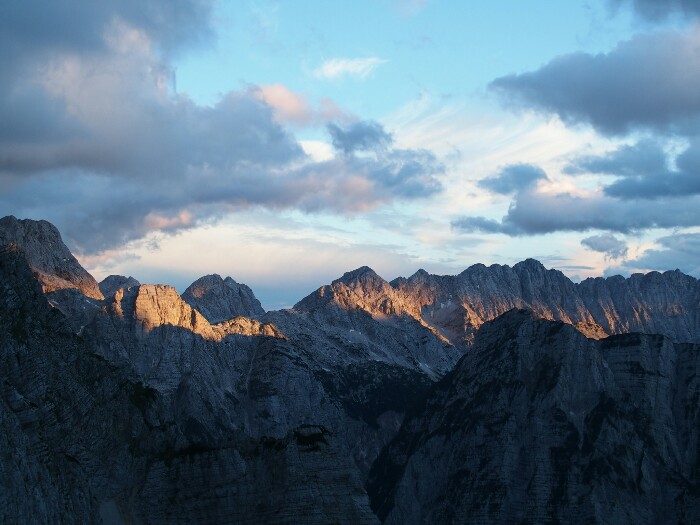 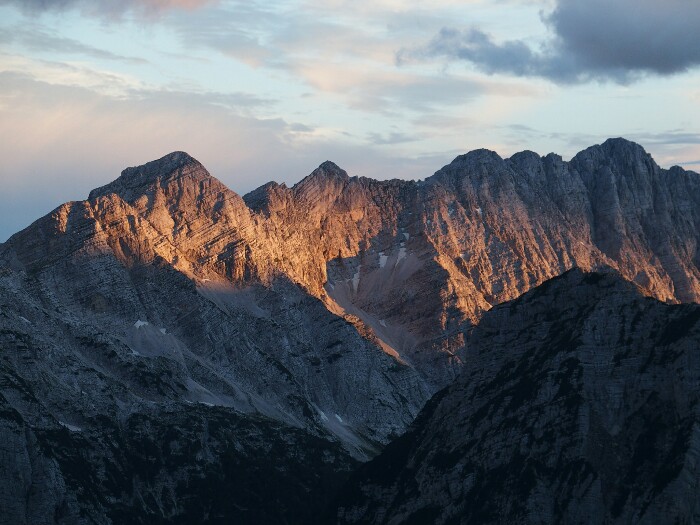 Day 20. Breakfast at 6.30am and before 7am I already leave the hut. Yesterday I was advised that it’s well possible to do the Triglav (the highest mountain in Slovenia and pretty famous here) via the Bamberger Weg. The weather looks much more stable even though there are a lot of clouds and wind. At first a short hike up to a pass, then it is 700 metres altitude down on a stony part. Then again 300 metres up in a very windy section. There are a few other people going up and it feels nice to know someone is around.

At the Luknja pass I have to take the decision if I should hike up to the Triglav via the difficult Bamberg Weg. The first part looks rather difficult. A Slovenian couple decides to not do it but tell me that the beginning and end is difficult but then it’s fine. So off I go, enjoying a lot the climbing. The trail alternates between via ferrata, other unsecured climbing parts and some easier hiking. It’s steep and challenging but I always have the feeling that I can well handle it. Closer to the top of the first steep part I start to feel tired but worse is the wind, or storm, that kicks in. It’s very cold and I cannot sit down anywhere to take a rest, it’s just to cold. It’s becoming flatter and easier to hike, there are again snowfields to cross. Sometimes the wind is so strong I have to go down on my knees. My face hurts because of the cold. I reach the sign “Triglav 1h”. From there it is again climbing and via ferrata. But I am done. My legs are tired, I am freezing and it would be too risky to climb up to probably even stronger winds. It’s a hard decision but the Triglav is covered in clouds so I wouldn’t even see anything.

So it means down again for me, but just one hour of rather easy hiking to the Koča na Dolicu. It is a very basic hut, toilets outside, just a sink to wash hands or brush teeth (but even there no water this afternoon). But I am too tired to continue another three hours to the next hut in my direction. Unfortunately we cannot even get into the rooms before 5pm so I have a chat with the nice girls working here, eat a soup (I am always hungry again!), sit and read and even sleep a little on the bank. But I am cold, the wind is still blowing outside. When we get the rooms it’s no relief because it is freezing cold in there. So again sitting in the dining room and writing my blog. Maybe I should have continued further down to the next hut, but I didn’t expect the rooms to be as freezing cold. This night I am very happy we are 5 people in a small room, heating it up with our body warmth.